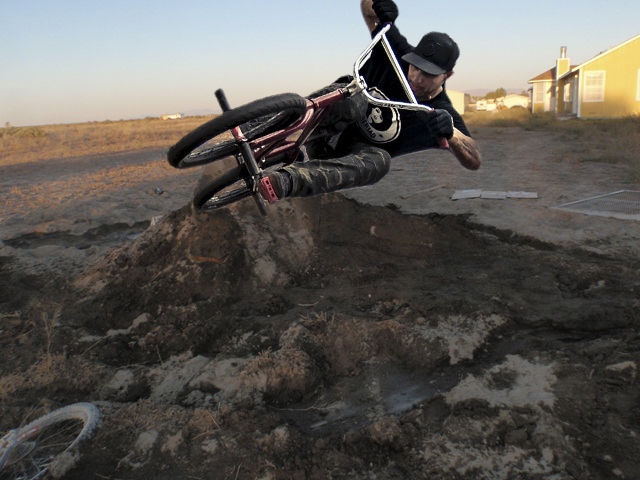 CHICAGO, IL—A 21-year-old suburban man was injured at a Chicago do-it-yourself bike park Tuesday afternoon following a crash on a jump that was built shittily, then rebuilt even more shittily.

West Chicago’s Réal Roughland said he crashed on the jump, which had recently been reshaped by a person who repeatedly said it sucked.

“That jump was pretty shitty before,” Roughland said. “Then someone came in, dicked around with it, and somehow made it worse.”

According to witnesses, the changes were made by Aurora rider Wayne Kerr, who claimed the shitty jump wasn’t set up right for his bike despite having hit it hundreds of times. They say he rebuilt the jump using his bare hands and a garden spade after breaking a shovel he doesn’t own randomly smacking at the dirt. He then walked away without actually fixing anything, somehow leaving things way fucking worse than when he began.

An inspection of the jump showed its radius was altered in a nonsensical manner, it’s height was shortened by one foot and it was lengthened by at least a yard. Furthermore, Kerr managed to dig a bomb hole into the landing transition, a dangerous addition whose purpose remains an unsolved mystery.

Roughland said he sustained an accidental vasectomy when he landed nose-heavy before suffering what doctors technically term stem and bars to stem and balls.

“I’ve hit that piece of shit jump so many times and I was used to the shittyness,” Roughland said. “But I knew when I felt my ability to have children disappear Wayne had really fucked things up.”

Bike park steward Brodie Broverson said he was unaware of the rebuild, but people randomly change shit at the bike park all the time.

“It can be challenging to ride here with all of the haphazard modifications,” he said as he smoked a bowl in the bushes. “Last year a guy cracked four ribs and his collarbone after someone built a drop out of sheetrock and particleboard and it collapsed.”

While pissed that he permanently disfigured his dick and balls, Roughland says he plans to keep riding at the bike park.

“The bummer is that my kids will never ride here because I’m incapable of having them thanks to Wayne,” he said.

(Chief of Staph contributed to this report.)