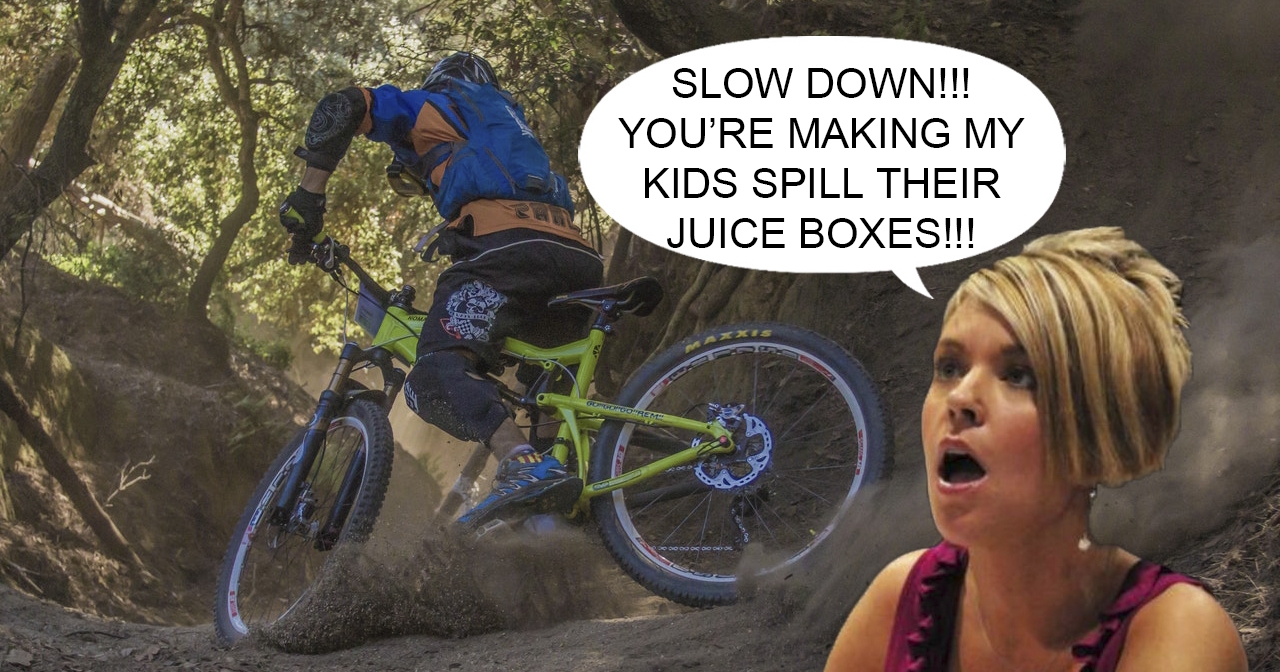 A pseudo-religious mother with a terrible haircut was incensed Friday evening when several mountain bikers nearly collided with her and her family as they hiked up a popular Salt Lake City downhill trail.

Caryn Karen said she and her six children were resting on a comfortable hump on the Dirt Luge trail, enjoying Hi-C juice boxes and Gushers fruit snacks when five mountain bikers used the hump to propel themselves into the air uncontrollably, nearly missing and frightening her children.

“I hadn’t been upset by something and erroneously assigned blame to someone else in at least four hours,” said Karen. “I try to live, laugh and love, but it’s tough to do when mountain bikers make my kids squirt grape Hi-C all over their Gymboree t-shirts.”

That was just the beginning of the Karen family’s problems.

As they continued up the trail with the children often unsupervised as Karen posted oversimplified political memes and intolerant comments to Facebook, several other mountain bikers had near-misses with the family. In one instance, a rider was thrown from his bike as he swerved off the trail when Karen’s five-year-old, Laightun, swung a stick at him.

“I ran as fast as my Skechers could carry me over there to give him a piece of my mind as writhed on the ground next to the stump he hit,” said Karen. “I live near this ravine, and my kids have every right to swat at bikers when they feel threatened.”

As Karen neared the top of the trail she said she and her family were harassed and berated by yet another group of mountain bikers.

“They had the audacity to politely suggest I choose a less-trafficked trail that isn’t specifically built for high-speed downhill mountain biking,” she said. “Then they threatened me and my half-dozen kids by saying hiking up this trail can be ‘dangerous.’ What’s that supposed to mean?”

Karen said she and her kids were upset following the hike, but she found relief in posting exaggerated Facebook statuses about her experience in between essential oil MLM posts as she drank a White Claw.

The frightening ordeal won’t keep her and her six kids from hiking up the trail again though.

“I fully intend to park my Honda Oddessy at the bottom of this trail and hike up it as long as I’m paying taxes,” said Karen. “And I want those bikers to know, if you mess with mama bear, you get the claw.”