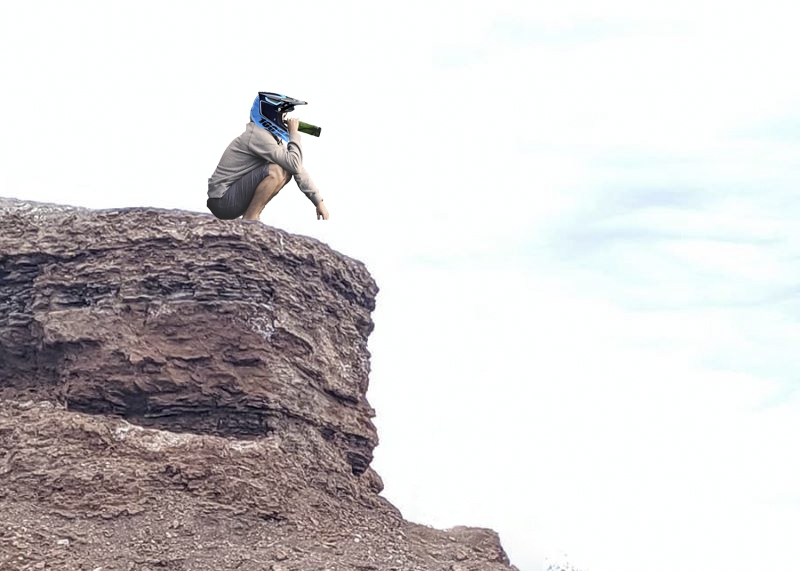 VIRGIN, UTAH—An Ogden mountain biker who was found near a creek bed Monday afternoon in Virgin has returned to his family safely after spending the entire Presidents’ Day weekend in an inebriated haze after consuming only beer and breathing only cannabis vapor.

Breau Boozer was suffering from dehydration, malnutrition, dizziness, acute respiratory failure and a complete liver shutdown when he was found, according to Dixie Regional Medical Center physician Michael Mendenbohns.

Boozer said he began drinking beer and vaping concentrates in Ogden immediately after entering a vehicle driven by his friend, Brody Brommel, and that he was completely shithoused by the time they picked up two more riders in Kaysville, just 17 miles away.

“The new alcohol content laws in Utah and the dispensary in West Wendover are fucking awesome,” said Boozer. “I’m usually not shitfaced until we get to Bountiful.”

By the time the group reached Beaver, about three-and-a-half hours into their trip, Boozer had already removed his shirt, telling others he was litty like a titty while he tweaked his nipples. He then laughed hysterically and passed out until the group reached Virgin, but somehow managed to dab while sleeping.

From that point, he refused all food and liquid other than beer for the next three days, raising each brew he drank into the air, toasting whoever would listen by saying, “this one’s for the boys.” Afterward, he’d hit his pen.

“Yo, that shit was fucking funny,” said Brommel. “Any time he set his beer down, he’d hit his dab pen. Then he’d switch right back to beer.”

Amazingly, Boozer somehow fought through severe inebriation to ride several trails at the old Rampage site. However, he misjudged nearly every jump, casing landings several times while refusing to acknowledge his intoxication might be responsible for his miscalculations.

“I wasn’t riding shitty because I drank 83 beers and smoked the equivalent of a pound of weed over the course of two-and-a-half days,” he said. “I usually ride better after a few hits and beers.”

Boozer said he’s not sure how he was left at the campground which is adjacent to the former Rampage site. The last thing he remembers is pissing all over himself when he fell over trying to urinate on a rock.

“That rock was actually my tent,” said Brommel, adding that he forgot to attach his rain fly. “At that point, I was covered in urine so I drove into town and just got a room at the Hotel Zion Inn.”

The others, citing near freezing overnight temperatures as a reason for decamping, went with Brommel, leaving Boozer behind. He was found the following afternoon by an unidentified climber who lives at the campground with his dog Dyno in the back of his 1996 Toyota Tacoma.

Mendenbohns said he’s not sure how Boozer survived the weekend.

“The patient’s body water percentage had dropped to 25 percent and his dark orange congealed piss resembled semi-dried nacho cheese,” said Mendenbohns. “In fact, I had to use a swine-specific spiral catheter to break through the gelatinous substance blocking his urinary tract. He also smelled more like shit, despite being covered in urine.”

Aside from some dizziness and blood in his urine from the swine catheter, Boozer said he’s feeling fine and he’s nearly back to normal.

“I copped some Natty Daddies from a guy in the hospital parking lot and put a new battery in my pen before my parents picked me up,” he said. “I just needed to get a little buzz on to kill my hangover, bro. I’ll be sending it with the boys in no time.”