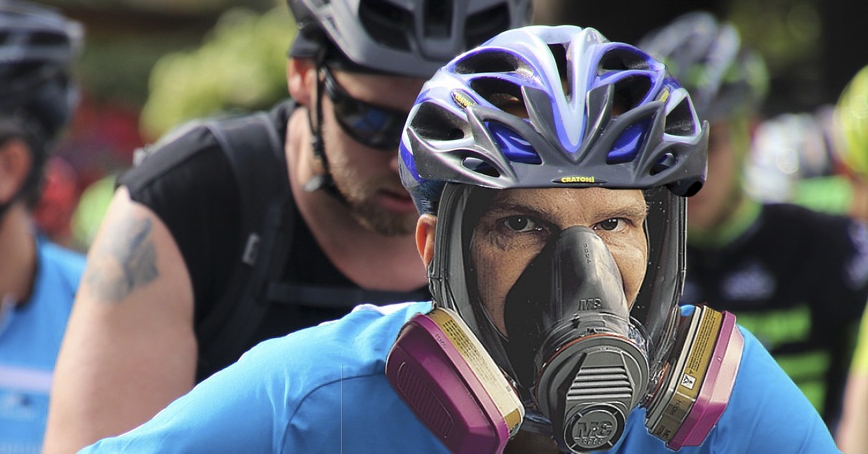 WASHINGTON, DC—The Centers for Disease Control and Prevention is requesting all enduro racers wear 3M 6000 full-face respirators with half-shell helmets and remain at least six feet from others or convert to full-faces for the remainder of the mountain bike season after the discovery of an infectious disease within the group.

According to the CDC, at least 52% of enduro riders are infected with what epidemiologists are calling ENDOVID-69, an endurovirus that somehow convinces riders to wear goggles with half-shell helmets such as the Fox Dropframe and POC Tectal.

Anthony Fauci, director of the National Institute of Allergy and Infectious Diseases, said the CDC doesn’t know much about the endurovirus yet and is suggesting the PPEs as a precautionary measure for two reasons.

Social distancing between riders should also help slow the spread of ENDOVID-19, Fauci said, adding that he’s not particularly worried about it spreading outside of enduro riding circles because no other groups want to hang out with people wearing goggles and trail helmets.

The endurovirus can be particularly infectious in riders who wear the original Smith Foreframe helmet–the group considered most at-risk–but ENDOVID-69 can infect anyone wearing a half-shell helmet with 150 to 180 millimeter-travel bike.

“Foreframe wearers are at the highest risk for ENDOVID-69,” said Fauci. “We’re not sure why the endurovirus attacks them more than others, but it may have something to do with the virus being attracted to a helmet that resembles the upper quadrant of R2-D2.”

Some have questioned the CDC’s request, saying the full-face respirators are overkill, and President Trump (who rides a Huffy) has not yet voiced support for Fauci’s recommendation, but Fauci said it is imperative to stop the spread of ENDOVID-69 before enduro races are overrun with riders wearing goggles and half-shells this summer.

Fauci said he will also consider cancelling all enduro races to combat ENDOVID-69.

“This is an extremely infectious and dangerous disease whose effects could last a lifetime in social media photos,” said Fauci. “We need to act decisively and swiftly before thousands of otherwise cool mountain bikers end up looking like assholes for the rest of eternity.”