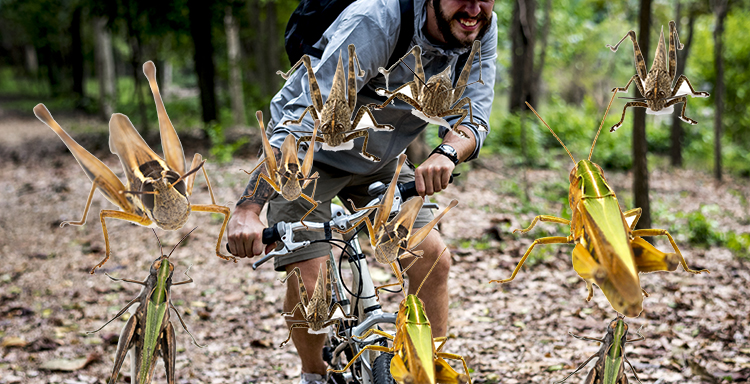 In a tragic but predictable event, a mountain biker riding Industry Nine (i9) Torch hubs was humped to death by millions of female grasshoppers Wednesday in Brown County, Indiana.

According to entomologists at Indiana University, Tony Fortissimo’s rear hub created a sound similar to that of the male grasshopper mating call at a volume and sustained intensity far greater than that of the insect’s natural capacity. Attracted to the hub’s intense buzz, an orgiastic swarm of wet-ass grasshoppers descended upon the unsuspecting man in a super-horny frenzy before humping him to death.

“I suppose we could call this a case of insex,” said IU entomologist Hopper Locusta. “In all seriousness though, I’ve never seen a sexual frenzy like this within the insect world. This is the first recorded case of reverse insectibukkakecide ever recorded.”

Locusta said it wasn’t necessarily the pitch of the hub that drove the female grasshoppers into a frenzy. The unremitting, earsplitting buzz of the Torch hub overpowered all other male grasshoppers within a one-mile radius, creating the perfect conditions for the mass humping.

i9 Torch hubs, renown for their near-instant engagement, are often utilized by people who aren’t receiving enough attention from friends and family. Lauded by mountain bike enthusiasts who spend more time picking up their rear wheel and spinning it than riding their bike, the wheels have found popularity within a subset of the mountain bike community that bitches about Bluetooth speakers while riding the most cacophonous bike possible.

According to Locusta, the morbid death from the hypersexual grasshoppers was preventable.

“If you don’t want to get fucked to death by grasshoppers, try an Onyx or DT Swiss hub, or at least get the Hydra if you still crave attention,” he said. “I’d really hate to see another person unnecessarily killed by a swarm of wanton insects.”