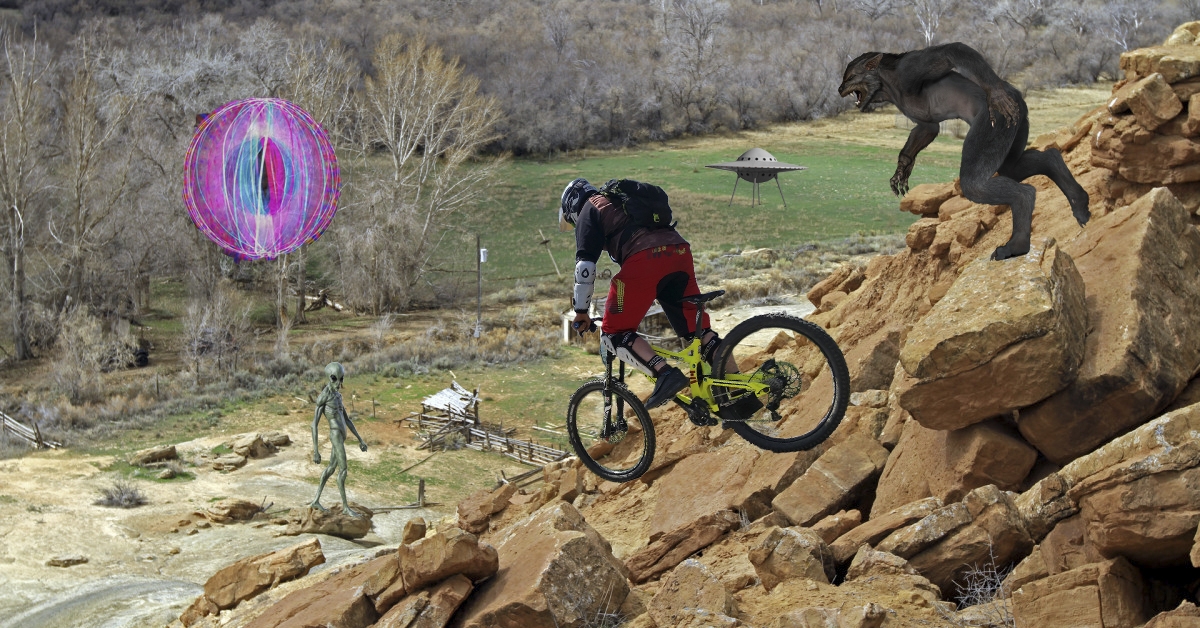 The 512-acre supernatural hotbed will include trails and features for everyone from XC racers and freeriders to werewolves and interplanetary aliens, according to developer Aileen Greenman.

“One of the cooler things about Skinwalker Ranch Bike Park is the diversity it will bring to the sport,” said Greenman. “Utah may have some racist tendencies, but where else will you find a wolfman riding a mountain bike with an extraterrestrial?”

The bike park will feature a beginner skills area where new riders can practice bunny hops over mutilated cattle of various sizes and develop better turning skills in the crop circle figure-eight track.

For more experienced riders, there will be several technical trails through crashed UFO debris fields that will require pinpoint steering to avoid falling on the razorlike nuclear-contaminated unidentified space metals.

Greenman said designers have kept the freeriders in mind too.

“We’ve already built our first jumpline, with each jump placed directly in front of an interdimensional portal,” she said. “Technically, each time you hit one of them, you’ll be performing the longest bike jump in history.”

Trail tester Tommy Testatrail, who has full access to the completed trails at Skinwalker Ranch Bike Park was both impressed and frightened by his experience.

“I don’t think I’ve ever jumped as high as I did when that beam of light got a hold of me,” he said after mysteriously disappearing and reappearing naked and starving in the woods four days later. “I was thrilled by the airtime, but terrified by the ensuing alien abduction.”

“One of the most fun things to do is play race the light, a game in which riders race a glowing orb that appears out of nowhere and shoots across the park,” she said. “It appears to be moving at four times the speed of sound so no one has beaten it yet.”

Visitors from all corners of the universe and every dimension are welcome, but Greenman said it’s best to leave dogs at home.

“Dogs are not welcome at the park,” she said. “They bark endlessly in an attempt to warn people about something only they can see, and quite honestly the aliens don’t take too kindly to them.”

The bike park also offers amenities such as Men in Black bike patrollers, a spa at Bottle Hollow where you can take a refreshing post-ride dip with your favorite evil Native American spirits, and great mutilated cattle steaks at the Adamantium Grill after a long day in the saddle.

“We promise this isn’t a way to lure people to their deaths or provide human research subjects as payments to aliens,” said Greenman as she morphed into a lizard. “We’re just trying to provide mountain bikers with another great bike park here in Utah.”