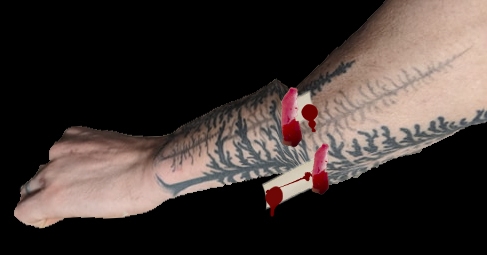 JACKSON, WYOMING—In an ironic twist of fate a 28-year-old Jackson mountain biker with trees tattooed on his arm broke his arm after running into a tree on Black Canyon Trail Sunday.

“I tell people I got this tattoo because I love trees, but based on the compound fracture of my ulna, it seems trees don’t love me,” said Dylan Millenyahl.

Millenyahl said he was trail riding at a high rate of speed when he was mesmerized by the sheer volume of alpine firs. In a state of awe, he washed out and high-sided, crashing left arm first into the very type of tree depicted on his forearm.

Following an argument about whether or not Millenyahl’s injury was a compound fracture that was resolved by WebMD, he and his friends fashioned a splint out of branches and hiked nearly two miles to the trailhead. He was then transported by ambulance to St. John’s Hospital in Jackson, where he had immediate surgery.

According to St John’s ER surgeon Dr. Rich Guy, injuries like this are happening more frequently, and those with tree tattoos on their arms are at an elevated risk.

“About 90% percent of the people ages 23 to 38 that we treat for mountain bike injuries have some type of tree tattoo,” said Guy. “It seems there is a correlation between bad tattoos, bad riding and perhaps bad decisions in general with this age group.”

Guy’s theory may hold some water. Millenyahl has endured three surgeries within the past five years, the span of time he’s had the tattoo. He also bought a tiny home he never lived in and quit his job to start a mountain lifestyle clothing business, which may be affected by the injury.

“My left arm will be in a cast for at least four weeks,” said Millenyahl. “Posting confusing photos of people staring off into space in the mountains twice a week will definitely be tougher.”

“Dylan’s bones will eventually fuse and heal,” he said. “Unlike his tattoo, his injury is only temporary, and eventually the pain and regret from his actions on his bike will go away.”