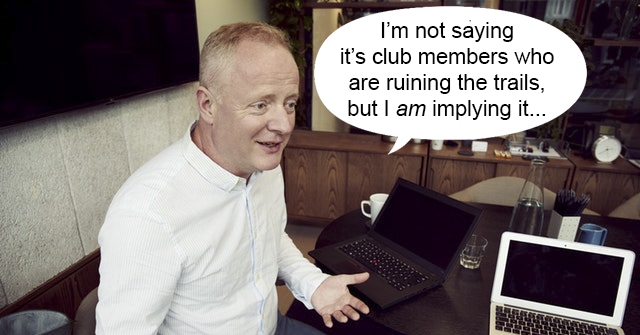 SPRINGFIELD, IL—The Facebook admin of a Central Illinois mountain biking group was once again displeased and surprised when a post reminding people to stay off muddy trails failed to do so.

“This is a real let down,” said Jerry Groaner, self-appointed Springfield Offroad Bikers (SOB) Facebook administrator. “I chastised every person in the group, despite the fact that none of them have ever damaged a trail to my knowledge.”

Groaner, who has made several thousand similar posts—each time precipitation has fallen or the ground has frozen and thawed—insists that those who have joined the Facebook group are the culprits.

“I highly doubt it’s some random hicks with Wal-Mart bikes riding just to see how much mud they can flip on each other,” he said. “It’s much more likely it’s the people within the Facebook group who show up to our meetings and events.”

Other members of SOB aren’ t so sure.

“Jerry is kind of a self-aggrandizing asshole,” said SOB member Geoff Gander. “It’s obvious no one affiliated with SOB is riding muddy trails, but Jerry hasn’t felt important since he retired from his mid-level management job at the coffee pot plant so he bitches at us about shit we didn’t do when it rains.”

Groaner said he’s just trying to make the trails the best he can.

“If I see some Skoal canisters and a case of Budweiser in the parking lot—telltale signs of mountain bikers, not random rednecks—it makes a lot more sense to take a photo, post it in our Facebook group and let everyone know I cleaned it up than it does to simply pick it up and put it in the garbage without telling anyone,” he said. “I’ve taught all of our members a valuable lesson that way.”

Despite his posts never solving any problems and most of SOB’s members hating him Groaner says he plans to continue them.

“I play a very important role in SOB,” he said.”Without me, this place would fall apart. If you’ll excuse me, I have to go. It’s starting to rain.”